My current work investigates themes of death and rebirth, strength and vulnerability, impermanence and interconnectedness. My creative process is inspired by nature, chaos, relationship, consciousness, Zen meditation, Buddhist study and my spiritual practice as a yoga and meditation teacher.

I began exploring butterflies in oil paint as a visual muse with the idea of creating abstracts inspired by the colors and shapes of their wings. Instead, I instantly became fascinated with their intricate anatomy and the impossibility of their existence. I also have a passion for ecology and the natural world. With the important role of butterflies as pollinators at the center of our food chain, I researched organizations that protect them in order that my work creates another outlet to bring awareness to their vulnerable habitats. I put together a resource list of organizations and other outlets that are doing the work of saving pollinators on my website for anyone to use and share.

Oil painting has been a passion for a long time while Chinese calligraphy and Japanese ensō are new loves. Each discipline feeds and supports the other. One process is precise and delicate, the other perplexingly spontaneous. Together, the energy of each expression intertwines teaching me how to find what in Zen is called the “still point”.

A few years back I participated in a weekend Zen retreat at the Zen Mountain Monastery in Mt. Trempor, NY and repeated the same retreat a second time in August 2019. The retreat, on the basics of Chinese calligraphy, was led by calligraphy master and Buddhist scholar Kazuaki Tanahashi. It wasn't much with regards to time spent but since then Chinese calligraphy has become a bit of an obsession. Calligraphy is freeing and playful requiring a child-like mind and paradoxically an attention to detail. I don't speak a word of Chinese and can maybe identify around 10 characters out of 50,000. What is most enticing are the forms – so graceful, beautiful and mysterious. What has kept my attention is the grounding and centering nature of the practice. It provides a way to bring my Zen practice fully into being through a creative outlet. Swishing around the page with the whole of my being has brought an ease to my painting and teaches an acceptance of every moment as it is. 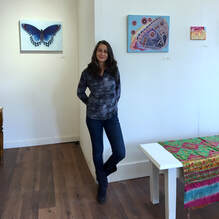 ​Monica DiGiovanni studied painting and drawing at the Pacific Northwest College of art before transferring to the Massachusetts College of Art. There she graduated in 1999 with a BFA in the Studio for Interrelated Media with a focus on creative movement and the human body as medium as well a variety of other multi-media disciplines. She is looking forward to a residency at Vermont Studio Center beginning in April 2020. Between 2012-2013 she spent four months in artist's residency at Welcome Hill Studios in West Chester, NH taking the time to reconnect with and unleash her creative spirit from many years of dormancy. In June 2019 Monica became a formal student in the Soto Zen order of her teacher, Rev. Gretchen Taihaku Seiren Priest, abbot of Shao Shan Temple, Woodbury, VT. She currently lives and works out of her apartment studio in Montpelier, VT. In addition to being an artist she loves her role as a yoga and meditation teacher.